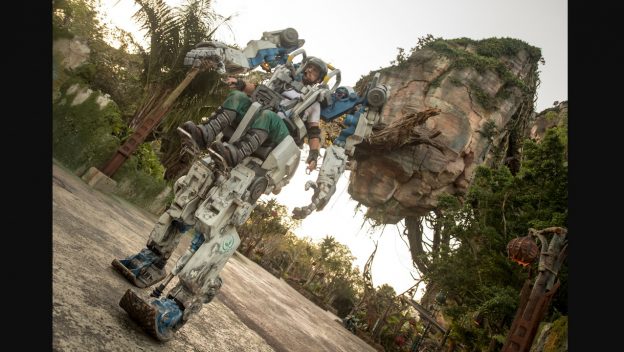 An all new suit is coming to Disney’s Pandora: World of Avatar at Disney’s Animal Kingdom. The new suit is a new storytelling detail being added to the area for the park’s 20th anniversary celebration. The suit will be part of the “Pandora Conservation Initiative”, as scientists will be venturing into Pandora to talk about the planet, and the importance of preserving it.

The new suit will be used to collect plants, and survive the terrain of Pandora.

The Utility Suit was created in partnership between Lightstorm Entertainment, Disney Parks Live Entertainment, Michael Curry Studios and Walt Disney Imagineering. While it may look like the AMP suits used in the movie, it’s actually something created specifically for The World of Avatar. The suit is part of a new show presentation that will start April 22nd, and will be listed on the shows guide in the My Disney Experience app.

So, let’s talk about it a little bit. The “suit” is actually an elaborate new stilt walking set up. It makes the stilt walker look like they are really controlling the suit, and using the legs as their own. It’s a very clever design, and will fit perfectly into the land as a new storytelling tool.

Animal Kingdom will celebrate it’s 20th anniversary on April 22nd, and will have several new additions, including a new Up bird show.