Late last year Sea World announced that it would be replacing the Believe show, the signature show at all the Sea World Parks this Spring. This morning on the official Sea World Blog the new show finally received a name and release date.

According to the Orlando Sentinel trainers will not be entering the water with the whales. I’m getting a Cirque style vibe on this one. More as we hear it.
From the official Sea World Press Release:

SeaWorld parks across the United States will debut an all-new killer whale show this spring and summer, connecting guests to the sea with a new level of energy, excitement and vibrancy as it educates and inspires them to make a difference in this world.

“One Ocean” features SeaWorld’s majestic killer whales as ambassadors of the sea, and the ocean as the center of our natural world. The show connects guests with these remarkable animals and immerses the audience in the vivid colors and sensations of the underwater world. At the core of the show is the unifying message that both animals and humans are part of one world, with one ocean, and its future is in our hands to cherish and protect.

“One Ocean” is scheduled to premiere at SeaWorld Orlando at the end of April, SeaWorld San Diego on Memorial Day weekend and SeaWorld San Antonio in June. It will replace the popular “Believe,” a show that enjoyed a five-year run in all three SeaWorld parks.

“This new show brings to life SeaWorld’s mission in the most powerful way yet,” said Jim Atchison, President and Chief Executive Officer of SeaWorld Parks & Entertainment. “This show is what guests love about our parks – thrilling entertainment that educates and inspires you to celebrate, connect and care for the world we share.”

The show features spectacular whale behaviors, including thrilling high-energy leaps and multiple whales performing simultaneously.  The whales interact in new ways with trainers, the audience, each other, and even the set itself.  In one segment, the whales play amid giant fountains. 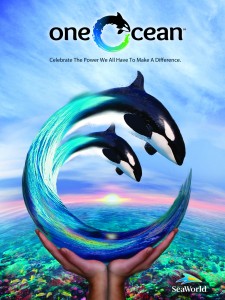 But even more important is the educational message the show imparts: we are all part of one world and have the power to make a difference.  The message of caring and respect for the world we share is woven throughout the show – encouraging guests to make a difference through their own everyday actions. 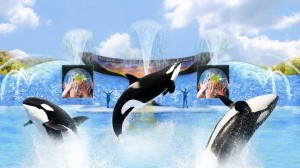 “There is an unprecedented level of energy, excitement and passion in this show,” said SeaWorld Parks & Entertainment’s Curator of Animal Training, Julie Scardina. “It is the ultimate SeaWorld experience: world-class entertainment that educates and inspires action. Trainers, producers and educators are collaborating on new ways to connect with the audience and show how closely the human and animal worlds are connected.”

For more information about Sea World including tickets, visit their official website.