What could have been-Ghostbusters shooter developed for Six Flags

Since the early 1900’s riders have loved dark rides. Some of the first dark rides were just called “scenic railways” or even “the Tunnel of Love” in which boats or cars traveled along rails or canals. The concept of the shooting ride, where basically a shooting gallery was intertwined with a dark ride, is relatively new. While it’s arguable when it first popped up, they didn’t become very popular until the late 90’s when Disney introduced Buzz Lightyear’s Space Ranger Spin rides into their parks. What if I told you that not only was the concept older by then, but it was done first by Six Flags…only they never had the chance to finish it? I’d say you’d better call someone…well…Who ya Gonna Call? 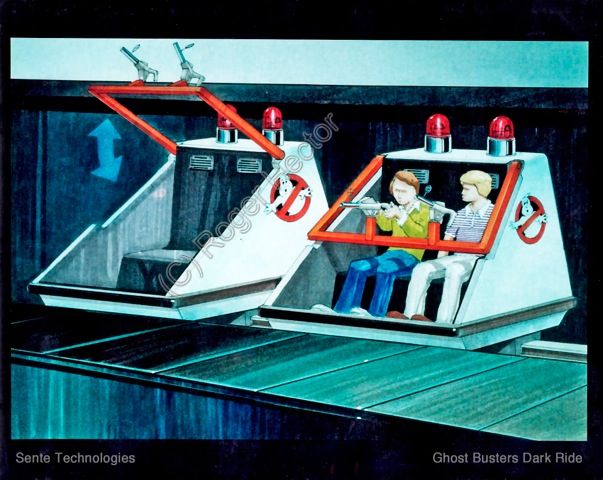 In a recent interview with one of the Sente Technologies founders, Roger Hector, 2600 Connection’s Scott Stilphen gets the earth shattering news that not only was there going to be a shooting style dark ride in the 80’s, but it was going to be themed to Ghostbusters. On top of that, it wasn’t Disney that was going to build it…it was Six Flags! 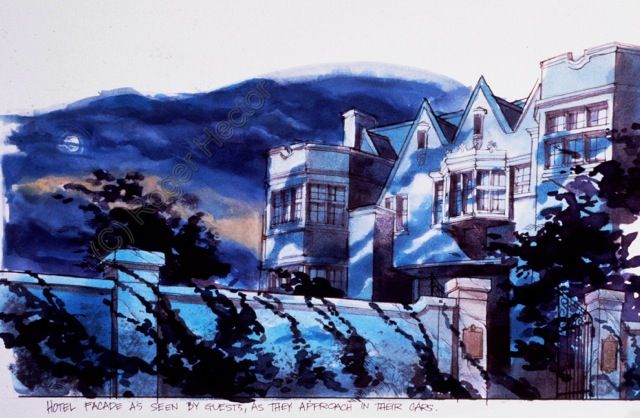 The attraction was called “The Hauntington Hotel” and was going to be a complete system design from the ground up for Six Flags, which was at the time, owned by Bally Games (between 1983 and 1988) the makers of coin operated games and owners of several casinos around the world. The attraction was going to use Infrared technology (the same used in remote controls) to allow riders to shoot ghosts that would materialize in the halls of this decrepit hotel. 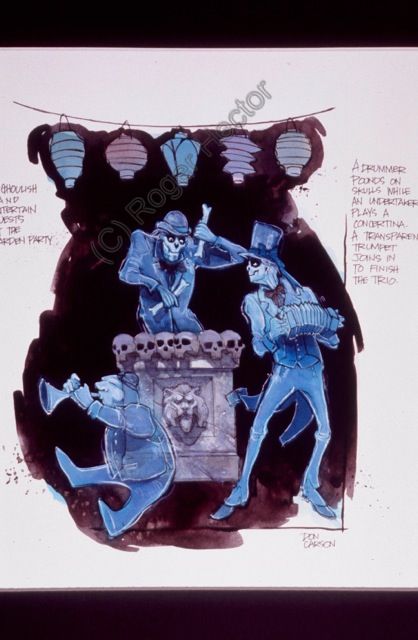 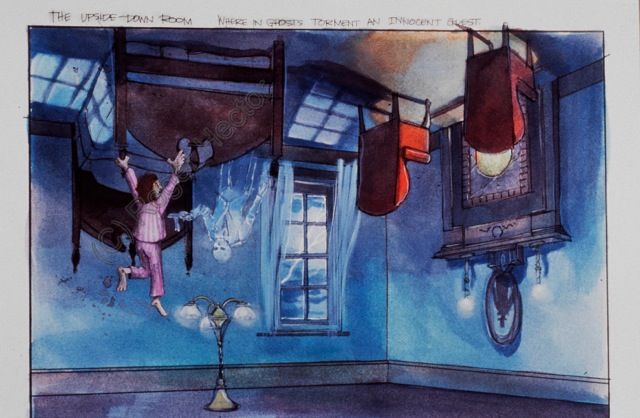 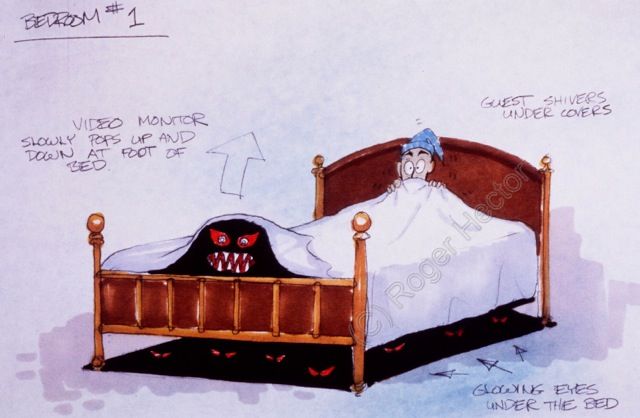 The attraction would have used not only the IR system to shoot targets, but would have kept score and in some cases even given prizes. The ride would feature several animatronic figures that would not only behave like you’ve seen in countless dark rides, but some would even interact with riders as they shot at them.

This is the kind of stuff that is seen all the time now in many dark rides by Sally and other dark ride manufacturers. A lot of the same technology is still used in attractions like Buzz Lightyear and even Men in Black:Alien Attack. Intamin was even involved in designing the ride layout. Of course all good coaster nerds know Intamin as the maker of huge coasters and drop towers. 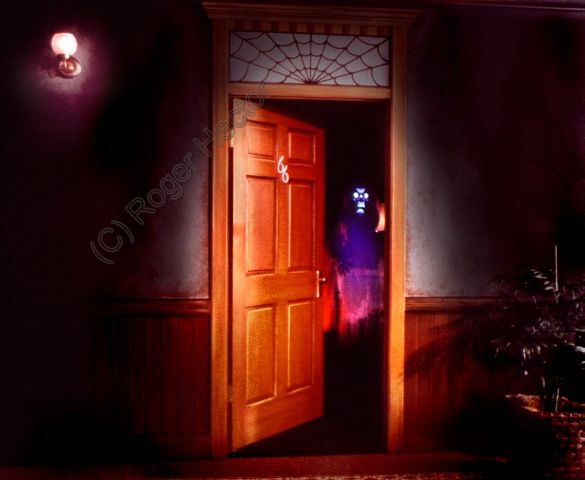 The kicker isn’t even that this ride was developed long before the huge shooter boom came in the late 90’s. No the kicker is the guy you see above you. That’s a materialized ghost with a Computer Generated head. Long before the CG boom, also of the 90’s, Sente and Bally was developing not only CG ghosts but also holograms. 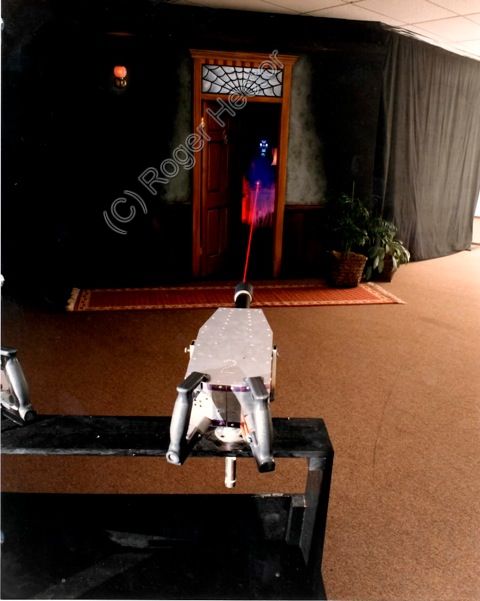 In case you were wondering just how far this concept got, it made it off of the pages and into the offices of Sente, where they built a prototype of the attraction, with a real working laser shooter. When the laser shooter hit the target, not only would the CG head react, but it would do things like BLOW UP! It was highly advanced, even for now. 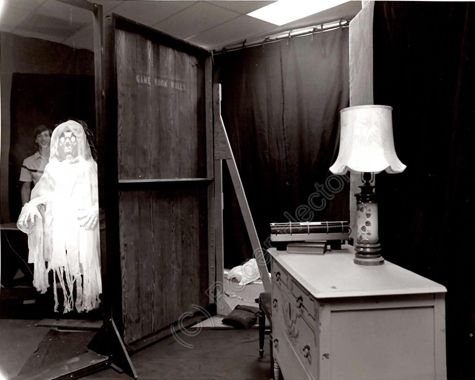 How did they accomplish it? New school meets old school. The group would arrange a Pepper’s Ghost effect in many of the scenes and would use the CG technology to accompany it, making the ghosts disappear. The ride was all but built, and was just waiting the greenlight. So why did none of this ever happen? Six Flags was sold. This not only sent the company spiraling into different directions for many years, but also put the project forever in hiatus.

Check out more concept art from the Ghostbusters ride that never was:

You can still see many of these effects being used today in rides like Men In Black at Universal Studios, and of course several Sally Dark Rides. Though the technology has been improved upon, the roots are still there. For the record, Ghostbusters did get an attraction at Universal Studios which closed to make room for Twister.

Could this attraction have been as timeless as many Disney rides? It’s very possible that with today’s technology not only could the ride still exist, but it could be the top attraction in the world. One of those things that are lost in ashes forever.

I highly recommend you head over to 2600 Connection (by clicking here!) for more of the interview and even more about Ghostbusters:The Ride!