Have you gotten your copy of Tron: Legacy on Blu Ray yet? Are you counting down the minutes until Harry Potter and the Deathly Hallows:Part One hits Blu Ray on Friday? Well aren’t you a good little nerd. We had a clip from part two of Deathly Hallows, but the lawyers wouldn’t let us use it. Stupid copyrights.

How about some news, headlines, and all around cool crap from the theme park world? Shall we then?

With all the animated films going to the hugely popular 3D CGI format, it’s refreshing to see a great 2D hand drawn film. The only problem is that it takes forever. This year, we get a new Winnie the Pooh movie, completely 2D in hand drawn goodness, but we also get a short film called “The Ballad of Nessie”. 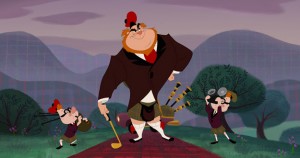 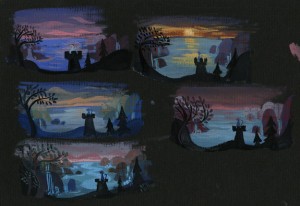 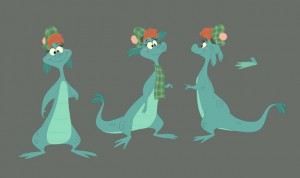 It looks like Scotland is going to be the new hot spot with this film, and next years Brave from Pixar. See more pics and more info at Coming Soon. See The Ballad of Nessie in front of Winnie the Pooh this July.

You may have noticed that the Concept art for Shanghai Disneyland is all castle, and not much of anything else. According to the LA Times, there’s specific reasons for that. The biggest reason being that they want to prevent Asian knockoffs. There are tons of Disney-like parks that pretty much make fun of the mouse. Also, the Chinese government is hugely involved. They want the park to be completely different than any of the other Disney parks while embracing the Chinese culture. Rumored concepts include Splash Pirates….yes…you read that right. A mix of Splash Mountain and POTC…YES PLEASE!

According to this article, Tokyo Disneyland will re-open this Friday after last month’s devastating earthquake and tsunami rocked Japan. Due to power shortages the park will not be open after 6p.m. for the time being.

Imagineer Collin Campbell has passed away. He was responsible for much of the design of EPCOT and many many original attractions.

If you’re an amazing actor, Universal Hollywood wants you! The park is holding open auditions via their Facebook page, with the winner getting a chance to appear on the official Universal Hollywood website. This is all in preparation for Jimmy Fallon’s premiere on the new studio Tram Tour.

Other
If you’re an investor, Mr. Six is coming back! Six Flags recently got out of bankruptcy, and their value has jumped in value enough that they are getting back on the stock market. Full story here.

Remember the toothless guy that wanted to build a huge theme park in Tennessee? Well, apparently he’s not all he’s cracked up to be as investigations have found that he has over $750,000 in judgments against him. Simply put, he owes a lot of people money and hasn’t paid them. Not all toothless people can be trusted, right Frank?

Legoland Florida has picked 10 hotels for it’s Bed and Brick partnership, including several hotels in Florida. These will be hotels that will have an exclusive ticketing option with the park. More details here.

And finally, look at this stuff isn’t it neat? Wouldn’t you think my collection’s complete, I guess you could say I’m the girl that has….ummmm….nevermind. If you want to be part of that world, (the Mermaid one) Weeki Wachi Springs will hold it’s “Mermaid Camp” in September to give aquabats a chance at being one of the famed mermaids. More details.

It opened in Sea World Orlando where Wild Arctic is now. It was a simulator that put you in the depths of one of the biggest mysteries the world has ever known. It took you on an adventure with in cabin effects and ride motion so smooth and fun that it was duplicated time and time again. Eventually it made it’s way to Sea World Ohio where it disappeared. No known videos exist of it, and very few pictures, though it has it’s own Facebook page. The ride itself is gone and lost much like many of those that ventured into it’s real life counterpart, which is why Mission:Bermuda Triangle is your ride of the day.