This is the time of year that separates the theme park fanatics from the coaster nerds. You know who you are. Universal Orlando just released the teaser page for Halloween Horror Nights 21. If you’re a coaster nerd you’re going “Big deal, it’s still three months away”.
Now if you’re a theme park fanatic you’re getting out your pad and paper because you know that with the simple release of a website, haunt season has begun. Sure, it doesn’t officially kick off until September, but you know that when Universal…the King of Halloween (according to our Best of 2010 Poll) starts poking around the pumpkin patch, it’s time to roll out the fog machines, get the fake blood flowing, and warm up the phone booth.

To wait for luck is to wait for my theme park news….

Goofy’s Sky School coaster has opened at Disney’s California Adventure, and while the park is now calling itself more family friendly critics are calling the ride a waste of time. According to Brady McDonald at the L.A. Times “the ride should have been removed instead of remade.” Wow. In fact, the whole area, which should be rid of it’s hideous exterior, is still in much need of a big face lift for many of the rides. Make the jump to read more. 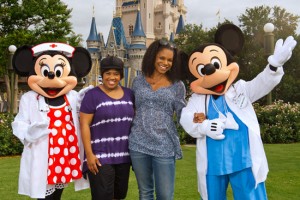 We report about a lot of Orlando area news, but we live in Vero Beach..home to the Disney Vero Beach Resort. It’s really a relaxing hideaway apart from all the hustle and bustle of the Orlando theme park scene. In other words, the only thing to do is to lay on the beach. Laying on the beach, you never know what surprises you may encounter. For one, the resort is seeing a record number of baby Loggerhead turtles hatch along their stretch of beach. The resort is even taking groups of kids out on excursions as early as 7 a.m. More details

Universal Orlando will be holding a Facebook chat with Summer Concert Series artist Boys Like Girls Wednesday June 29th at 5p.m. EST. You can jump to the official Universal Facebook page and chat along.

Jay Leno is looking for couples who met using an online dating service and who live in the Los Angeles area. If you meet those requirements, he will be taping a segment at Universal Hollywood next to the Globe on July 6th. More information.

Ron Meyer, the current President and Chief Operating Officer of Universal Studios will remain in that position until at least 2015. More details

It’s seriously just over two weeks until it all ends for Harry Potter. Warner Brothers has released a featurette which explores “Where we Left Off”. It’s a cool look at the events of the last film leading up to this final chapter. So word to those who haven’t seen the Deathly Hallows Part 1, spoilers ahead

Quassy Park, whom we’ll have more from in the coming weeks, will be shooting off their 4th of July fireworks…..IN 3D!! The special 3D glasses will go on sale at noon, and will be on sale until they sell out. Now the glasses are only a dollar, and the money from the sale of the glasses goes to benefit “Prevent Blindness Tri-state”. More information

Live in the UK and want to get married at a theme park? Now you can, as Drayton Manor has started offering weddings in the park. Couples can wed in the Tower and Hamilton Suites. More information.

Brad Bird, director of the Incredibles (my favorite Pixar film) has directed the next installment of Mission:Impossible entitled Ghost Protocol. It stars Tom Cruise, and Simon Pegg and looks pretty bad ass in the first trailer from the film that opens this Christmas

You take part in the filming of a Frank Kincaid Masterpiece, you’re welcome. You make history by being the cast of the biggest disaster film to hit the silver screen. And just remember, look at the rock…don’t take your eyes off the rock… Today’s Ride of the Day is Disaster at Universal Studios Florida