The internet has been abuzz for the past few days with all things Universal and JAWS. Captain Jake’s Amity Boat Tours set sail for the last time on Monday night, and all of Amity is closing up for good. I guess word of that little “fish episode” finally got out. Regardless of what people are saying will replace JAWS, the attraction has been part of the park’s landscape since it opened. They have a word for attractions like that. Classics. 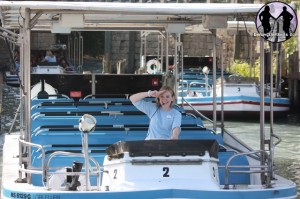 Before we set sail on a tour of Amity, and all the landmarks associated with that mean old shark Jaws, we want to take a minute and salute the Skippers. The Jaws Skippers are what made the ride what it is. If you got a bad skipper, your experience was so-so. If you got a great skipper, it made your experience all the better. We took our final rides New Years Day and had several great skippers. 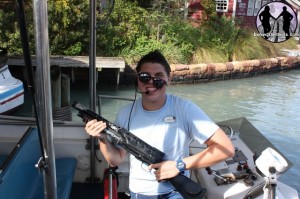 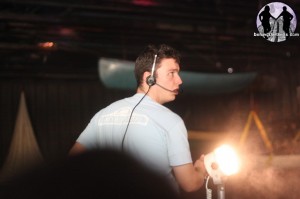 To pick a favorite skipper is like picking a favorite kid. They each do something special, but hands down the skipper we had the most fun was the guy above. Uncle Jesse was an absolute riot. He engaged the guests, and even played with their emotions. Skipper Garrett was a lot of fun, especially towards the end. The most fun skippers were the ones that would deviate a little from the script and add their own special touches. 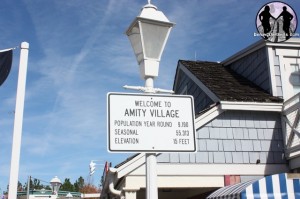 The ride takes you to Amity Village, home of the events that inspired the movie JAWS. The town is completely aware of the movie, and takes full advantage of it. Captain Jake runs his Amity Boat Tours, showcasing the places from the film that the actual events happened. 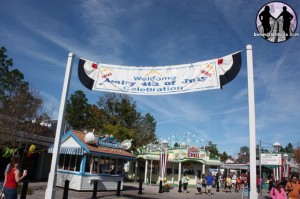 The town is in constant celebration of the 4th of July, and there are all kinds of fun carnival games, and great things to eat. If you stroll around you can see several of the landmarks from the film.

The biggest tourist spot and photo op, though was the original shark from the film. JAWS himself hangs prominently in the town. 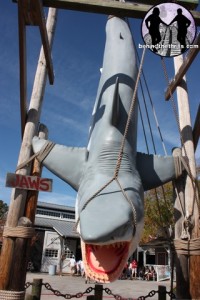 The entire area was a fun place to visit, and really added to the entire experience.

The ride itself was state of the art at the time. The movie had so many problems with one animatronic shark, so what did Universal do? They built seven. The ride originally opened with the park in 1990, but constant problems with the ride system caused Universal to shut it down, and partner with another company. Two key scenes in the ride were changed, and the ride was reopened to rave reviews in 1993. 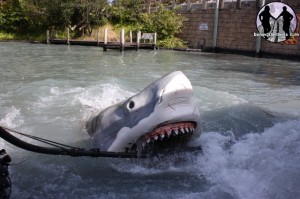 The queue itself has a special place, and adds to the ambiance of the ride as you are watching television broadcasts of WJWS-All Jaws, all the time. It was a fun poke at local programming, and the complete video introduced you to several new characters, including Captain Jake and Chompy.

While Universal has specified that it was just time for the attraction to go, due to an all new experience coming soon, many speculate the variety of reasons to the ride’s closure. Ever since the increase in fuel, the ride has been shut down on numerous occasions, and a lot of the fire effects have been scaled back. In recent years, apartments have been built directly behind the attraction. Jaws featured a huge fireball ever few minutes, and the loud noise of the hydraulic sharks and water cannons couldn’t have been fun to sleep to. In addition, the hydraulic systems have been in place, and since they are underwater, can be very expensive to repair.

So, while many speculate on the replacement, we salute Captain Jake, Chompy, Gordon on Amity 3, and all the amazing skippers. And after all…we did get him, right guys?

Video-Sperry rolls out all new Jaws X line of shoes, and you must have them!