Halloween in Orlando is a very special time. Theme park Halloween events dominate the area, with Halloween Horror Nights bringing horror to new levels each and every year. In the past few years, however, that horror has seeped out of Universal Orlando, and has started to spread to other parts of the area. Horror fans can get the fear all year at nearby Legends: A Haunting in Old Town, and just down the road in Winter Haven, the screams can be heard from “Shallow Grave”. Now, the nightmares are starting again. Something that hasn’t been around for a while is starting to stir, and your worst possible nightmares are about to come true. Are you ready?

Nightmares at the Majestic will open this October for select nights. Unlike other haunted houses, Nightmares at the Majestic promises to be a “total sensory overload of terror”. The all new haunt will be brought to life by AEO Studios (click here for the official site), which specializes in theatrical make up and effects, as well as design and production. According to the site, Alan Ostrander is “Hong Kong’s Father of Halloween”. Ostrander also served as make up designer, show manager, and actor at Terror on Church Street for many years. Terror on Church Street was a year round haunted attraction that helped to propel Orlando to the haunted Mecca that it has become today. That haunt opened in 1991 and closed it’s doors in 1999.

Nightmares at the Majestic will run from October 1st until Halloween on Thursday-Sunday nights. In addition to the haunted attraction, there will also be live entertainment and specialty acts, as well as food trucks and more. We’re not sure of all the details just yet, but the official Facebook Page (click here) offers us a great synopsis of the horror that is coming. 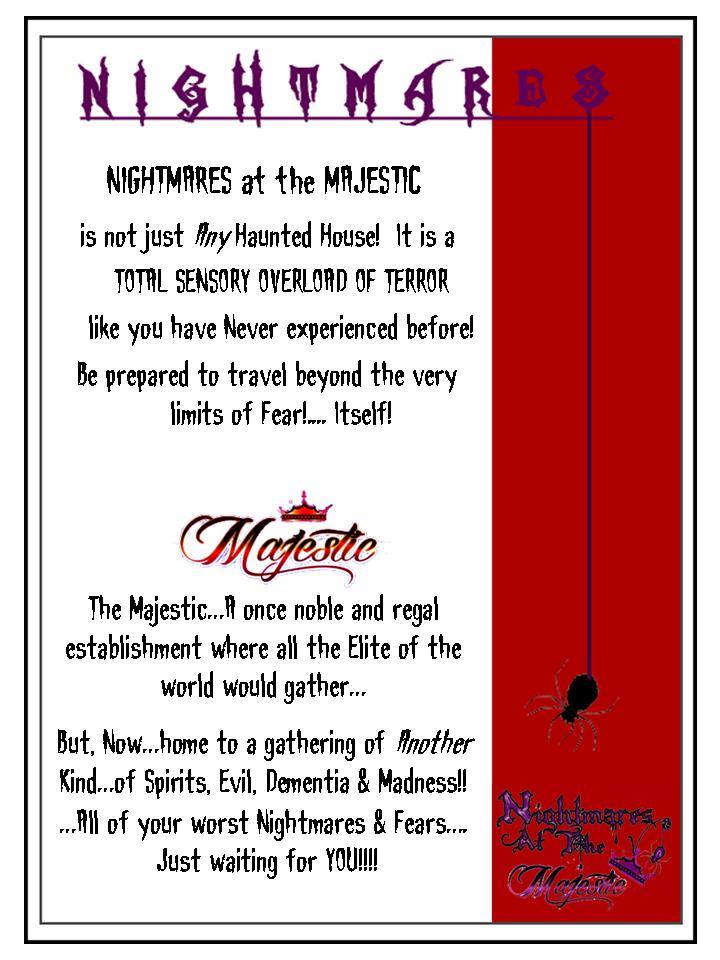 With a professional make up studio, and special effects, Nightmares at the Majestic will definitely be on our list of haunts this season!
Update
Nightmares at the Majestic has launched an all new Indie Gogo page to help get the ball rolling. Different donation levels give guests the chance to earn VIP p armies and more. Click here to help get an amazing new Orlando haunt scaring!
Stay tuned as we bring you even more terror, and be sure to get social with us on Facebook and follow along with us on Twitter @BehindThrills for the latest updates!

For more information about Nightmares at the Majestic, including tickets, visit the official website by clicking here!