Carowinds announces the closure of Thunder Road-fans fight back

Screamscape first reported it, and now Carowinds confirms it. The iconic wooden racing coaster, Thunder Road at Carowinds is closing, and closing fast. The park announced over the weekend that the coaster would give it’s last ride during the summer. What will happen to it? The rumors run rampant, and for fans of the coaster, they aren’t good. Even more, the fans of the coaster are fighting back, as only the internet allows. 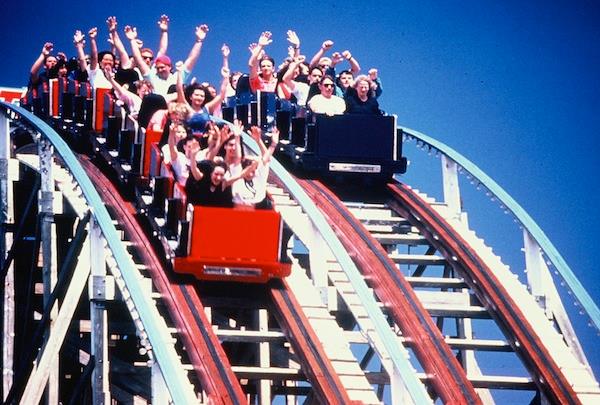 Just shy of 40 years, Thunder Road, the duel track wooden coaster, will give it’s last ride on July 26th, 2015. The coaster made it’s debut in 1976, three years after the park opened. The coaster has seen some major weathering over the past three decades, making for a rough, and unpredictable ride.

What will happen to the coaster? While many are hoping for a revamp of the existing coaster, with a new steel-wood hybrid like many others are doing, the rumors are saying that it’s not going to happen. Instead the coaster will be demolished, and the land that it sits on will be reclaimed as part of a major waterpark expansion, that should also be announced later this year. Any hopes of a new coaster seem unlikely, as the park just opened the record breaking Fury 325 this summer. The new coaster reshaped the park’s entrance, and skyline.

Naturally, the park has announced the ride will close, so the fans have spoken back loud and clear. They do not want to see the coaster go. A Facebook page has popped up, trying to get Carowinds to change their mind about the coaster. If that wasn’t enough, there’s a petition online (click here to sign), with over 2,200 signatures. The goal is to get Carowinds to keep Thunder Road. Will it fall on deaf ears? Most likely.

While fans have the best intentions, sometimes they can’t see the repercussions of keeping something open, that the park has deemed worthy to close. The coaster is not in the best shape, and has had several attempts at retracking the coaster in 2008, and 2009. Despite the efforts, the years of neglect by the park’s previous owners, Paramount, left the coaster in disrepair that, while usable, will still take way too much time, and money to bring back to it’s former glory. Plus, the coaster is sitting on prime real estate that the park could definitely use to substantially grow the waterpark.

Stay tuned for more from Carowinds, and be sure to get social with us on Facebook, and follow along with us on Twitter @BehindThrills for the latest updates!

TAGCarowinds Ride closure Thunder Road
Previous PostSpooky Empire: Get a glimpse of the cast of American Horror Story: Freak Show, and help a great cause! Next PostSix Flags Over Texas reopens after flash flooding submerges coaster