American Horror Story is an audience favorite, and has been rumored to be an attraction at Universal’s Halloween Horror Nights for several years. It’s never happened, but the makers of American Horror Story are crafting an all new horror story for television, and it’s heading to theme parks faster than anyone could have imagined. 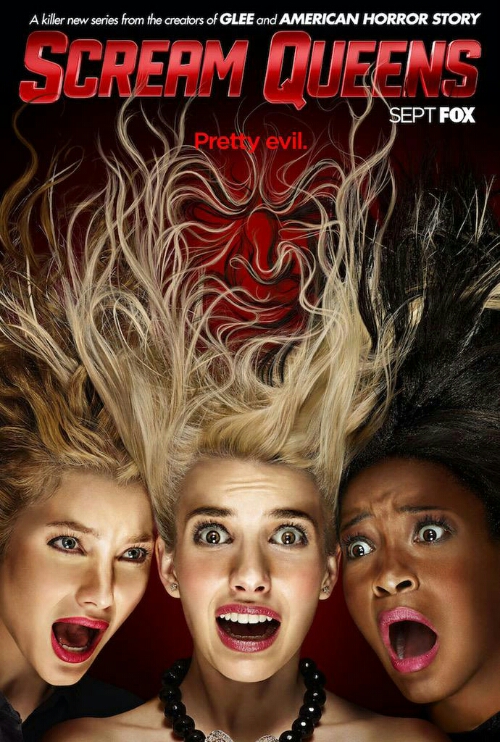 Scream Queens is an all new show by Ryan Murphy, Brad Falchuk and Ian Brennan, the Emmy- and Golden Globe Award-winning executive producers of “Glee” and “American Horror Story, and it’s taking a stab at the slasher genre. It stars original Scream queen, Jaime Lee Curtis, Abigail Breslin, Emma Roberts and Lea Michelle. It centers around a college where a killer in a devil costume kills students at the college,  one murder,  one episode at a time. It’s part slasher flick, part black comedy,  and it’s all coming to Six Flags parks.

Beginning this summer,  Six Flags will start rolling out the posters and artwork for the new series in six of their parks. Then beginning in September, “branded attractions” will debut.
This definitely means that guests can expect to see Scream Queens at Fright Fest, the parks annual Halloween event. There’s a good chance that the attractions will be houses based on the series,  and we’ll see special in park programming based around the show, most likely including merchandise.

It will be interesting to see how the show does, and if it has as large of an impact as American Horror Story has.

Stay tuned for more from Six Flags, and be sure to get social with us on Facebook and follow along with us on Twitter @BehindThrills for the latest updates!