Disney’s Animal Kingdom to bloom at night beginning this summer

Disney’s Animal Kingdom at Walt Disney World isn’t known for it’s night life. That’s about to change, as the park is making some huge moves to bring the park into a whole new light this summer, as it pushes the fun into the night. We’ve already told you about the huge new nighttime show coming to the park on April 22nd, but the park also has other plans which will take it further into the night, and change how you see the animal based park. 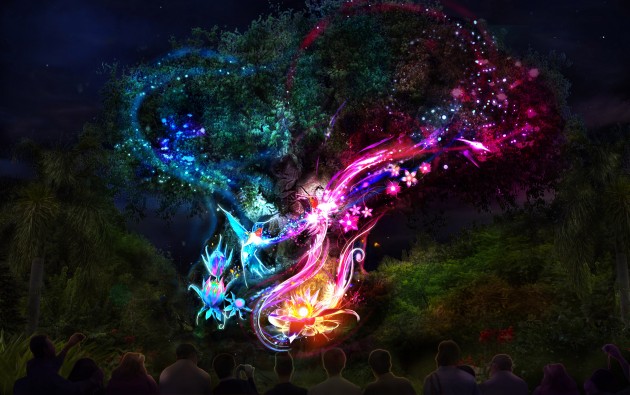 The biggest new addition, besides Rivers of Light, will be the Tree of Life Awakens. Every night, as the sun goes down the iconic Tree of Life will have the spirits of the animals “awakened” by magical fireflies. The awakenings will happen throughout the night and will be be filled with stories and enchantment.
The Kilimanjaro Safaris will now offer nighttime safaris with special lighting that allows guests the chance to experience the safari at night, and introduces two new species to the tour with hyenas and African Wild Dogs.
Discovery Island Carnivale will bring in new food, music, dances costumes and more that will engulf the entire island.
The Harimbe Wildlife Parti will bring new Street musicians, entertainers, food and village artisans and merchants to a huge party.
Also later this summer, the new Tiffins restaurant will open for lunch and dinner. The restaurant celebrates travelling, which will be very evident in the food and decor. There will be indoor and outdoor dining, with some great new waterfront views.

It’s found to be a great year to visit Animal Kingdom as they transition from a daytime park to a gorgeous nighttime destination.