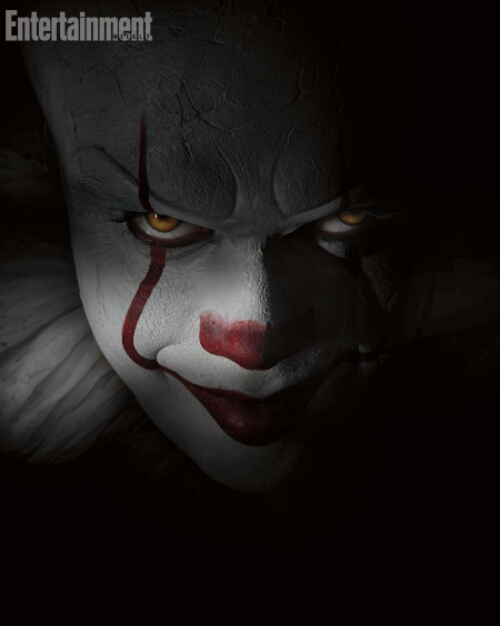 Yesterday, Entertainment Weekly unleashed a first look at Bill Skarsgard from the new adaptation of Stephen King’s IT. The new film, directed by Andres Muschietti, will hit theaters on September 8th 2017. The new film will be the first of two parts in the story, and will see only the first half of the story. If the film is a success, which we hope IT is, there will be a sequel which will pick up the reigns of the second half of the book.

The book was previously adapted for Television in an ABC Mini-series. The clown above is named Pennywise, and he’s not really a clown at all…he’s an IT. A shape shifting alien that preys on the weak. The original Pennywise was played by Tim Curry, and really was the best part of the series. Tim Curry terrorized the children on the show, and now it’s Skarsgards’ chance.

Here’s a fun story. My sister Sara is about 13 years younger than I am. The original film hit when she was about three (making me 16). She had a love for clowns, and had clown everything. That would be ruined one night when she would crawl out of bed to find me and her dad watching IT. She was drawn in by the clown, as he came out of the drain in the shower. The only thing we heard was screaming as the clown showed his true nature. Two things happened that night, one…my sister would not take a bath for about a year. Two, from that day on she has horrific nightmares about clowns, and can’t stand to even look at them.

Naturally, I’m going to surprise her by taking her to see the remake.

Are you terrified of clowns? Let us know in the comments below!