The Iron Revolution is coming to Cedar Point and Kings Dominion! 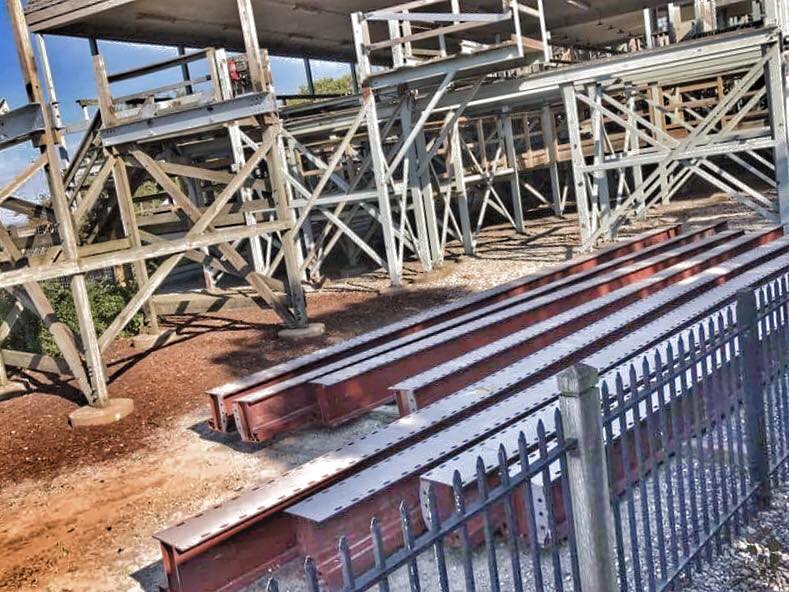 A few years ago, Rocky Mountain Coasters came out with this insane new idea. They could build a wooden structure, with steel reinforcements and rails, and come up with a hybrid new coaster. The feel and look would be wood, but it would be able to do many insane things that steel coasters could do. From that new hybrid came Outlaw Run, a new take on the wooden coaster that could reach insane speeds, and would have three inversions. The idea was a huge, and instant success. The coaster won awards, and in the following years inspire countless coasters to be remade from wooden rattleboxes to smooth as glass steel freak shows, capable of doing insane tricks and breathing new life into old coasters. Now, it looks like Cedar Fair is looking to capitalize on the new trend in coasters by taking out some of their older and less popular wooden coasters.

While Outlaw Run at Silver Dollar City started the coaster revolution, it was the New Texas Giant at Six Flags Over Texas that got everyone curious. That coaster had overbanked turns, new track, and a huge new steep drop. From there Six Flags would go on to remake six old wooden coasters at Six Flags parks, with the Joker at Six Flags Discovery Kingdom being the last one to date. The coaster rehabs have been wildly successful, and have turned out some crazy new ideas. Now, it looks like it’s Cedar Fairs turn to try, and the big question is, just how big will they go?

Back before Cedar Fair bought many of the parks, they were owned by Paramount. Under Paramount, many huge new records were broken and industry standards were set. The original looping wooden coaster was even built at Kings Island, which is one of Cedar Fair’s premiere parks. Son of Beast was the tallest, fastest and only looping wooden coaster. It had an all wood structure, but used a solid steel loop in the middle of the ride. After many problems, including a derailment, and a brain aneurism, the coaster was shut down permanently, and torn down to make way for Banshee. So, what will we see from Cedar Fair in the near future?
Earlier this year, Cedar Point announced that they would close Mean Streak for good. When it opened in 1991, it was the tallest and fastest wooden coaster in the world. Now it’s being disassembled, with an uncertain future.
Just recently, Kings Dominion also announced that its old wooden behemoth, Hurler, would close very soon, for good…or would it?

The park announced that, yes, Hurler was done for…but we could see something new in 2018 for the site of the coaster. Of course, nothing was confirmed, but immediately thoughts went to Rocky Mountain Coasters.
While nothing has been officially announced, sometimes you don’t need an announcement to make it official. Over the weekend, track was spotted by coaster fan group, In The Loop at Cedar Point.
Facebook Embed link via In The Loop:

That is maroon Iron Horse track. If you’re not familiar with Iron Horse, it’s the signature track used in the crazy new coaster designs by Rocky Mountain Coasters. It’s not official, but it is happening. Rocky Mountain Coasters are coming to Cedar Point. There is no word on exactly what kind of coaster it will be, or what it will do, but this is huge news. The Iron Revolution is coming to Cedar Fair, and with their tack records on new coasters, it’s going to be nothing short of amazing.
We may see the new coaster at Cedar Point as early as 2017, but we’re going to take a 2018 opening date as a safe bet. New Rocky Mountain Coasters go up every single year, but so far it’s only been in parks like Six Flags. With Cedar Fair jumping into the game, there will be more coasters all around the country and even closer to you than ever before. Also, it makes Rocky Mountain Coasters more of a theme park industry leader, and we could see bigger parks like Busch Gardens or even Universal jump on the new coaster train in the very near future.