A quick trip around Sea World

With the opening of One Ocean, and Summer Nights at Sea World still a few weeks away things are pretty quiet at Sea World Orlando. One Ocean is bringing in the huge crowds and people are still flocking to the park’s rides like Manta and Kraken. So while the park doesn’t have any major new attractions or construction, things are still busy. Busy is good.

Dine with Shamu is still closed and has remained so for going on two years. It has reopened in the other Sea World parks. One other major thing that has been down for quite a while is the underwater viewing tank for Shamu. Now we have a good idea of why. 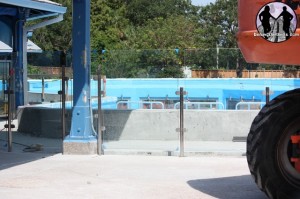 It would seem that the pool in the areas for the Underwater Viewing as well as the Dine With Shamu are completely drained and work is being done. Could this be the installation of the quick rise floors that the park has said they will install? Perhaps. Though one has to wonder what will happen when the park has to install the floors in the main pool.

More pics of the pool area.
[flickr-gallery mode=”photoset” photoset=”72157626787180147″]
It’s worth mentioning that all of these pictures were taken from the guest area next to Shamu Stadium with a really good zoom lens. 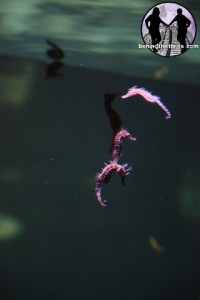 In the Manta aquarium area there seemed to be an abundance of Seahorses. One major exhibit that tends to get overlooked is the Pacific Octopus. He really is fascinating to watch, though most of the time he just sleeps while stuck against the wall of the aquarium. We were able to catch him not only moving across the tank, but also watched as he bumped into a few sea anenomes.

This was shot on the HTC Thunderbolt, so the quality isn’t as good as it normally would be, but still you have to love the reaction the octopus gives as he accidentally brushes up against the anenomes. In the end, he actually rubs his head! Fun stuff 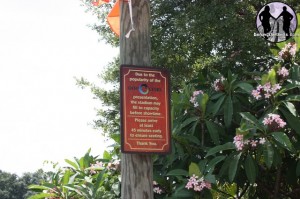 One Ocean has proven so popular that the park has put up signs advising people to arrive at least 45 minutes before the start of the show. 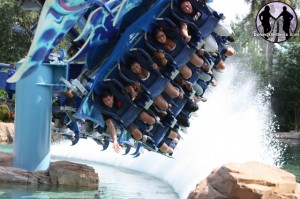