Between the Perkins and the Popeyes off of International Drive several members of the media gathered in an old parking lot. While we all had ideas of what was happening, we didn’t know for sure that the unassuming spot we were all standing in would change the skyline of Orlando. On that parking lot, the plans were finally unveiled for the all new Polercoaster.

The promise of the world’s tallest roller coaster coming to Florida was made at IAAPA back in November of 2013, with a promise of a location to come some weeks later. Fast forward seven months later, and we finally know where the coaster will go…In fact, during the press announcement,  we were standing in it. The all new Polercoaster will be 570 feet tall, and will easily take the claim for the tallest coaster in the world. The Polercoaster also has a very fitting name: Skyscraper. While it will become the tallest coaster in the entire world, it all also hold other records, including being one of the longest coasters in the world at 5,200 feet long. It will be the centerpiece of an all new entertainment district with restaurants, shopping and more called Skyplex.

The coaster itself will wind down towards International Drive in Orlando. It will be manufactured by US Thrill Rides,  and will be a major facility that will have the majority of it’s venues indoors, which is great especially in Florida’s summer heat.  Rain and weather will not be a factor. Back to the coaster… This will not be your standard coaster. The Polercoaster is a new concept that takes riders up, instead of out. Simply put instead of climbing a hill, the coaster will climb a tower. Guests will then wind their way back down the tower. Unlike previous world tallest coasters, the all new Skyscraper will feature several maneuvers. When guests encounter their first inversion,  they will be fifty stories above the ground. The fun will not stop there,  as the almost 12 acre plot will feature go kart tracks, party facilities and a restaurant at the top of the Skyscraper coaster. It will also feature the largest glass elevator on the outside of a building. Skyscraper will be an only-one-of-its-kind in the state of Florida. 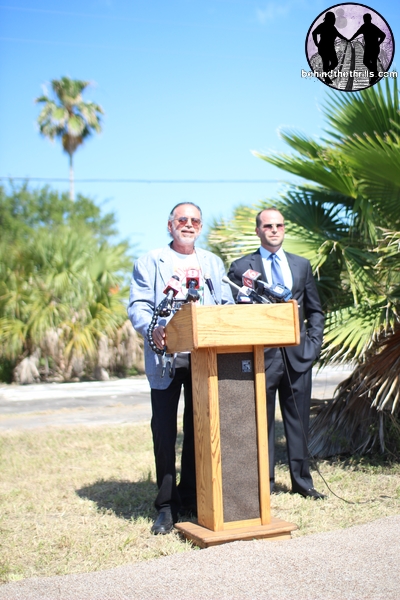 “We’re extremely excited about creating a record-breaking, must-try attraction on International Drive,” said Joshua Wallack, Mango’s Tropical Cafe COO, who also will open a Mango’s Orlando next year across from International Drive from Skyplex. “Nowhere in the world will you have two iconic structures like The Skyscraper and the Orlando Eye. This will be an inedible opportunity for International Drive.”

Check out even more pictures from today’s press conference:

If you’re unable to view the slideshow, click here.

The all new coaster and entertainment complex is expected to open in 2016 and construction will being right around the second quarter of 2015. Admission is expected to be under $20 dollars for unlimited rides on Skyscraper. The admission system will more than likely be based on a card that can be loaded with cash that will work at other venues within Skyplex, including an arcade.  The new Skyplex will be located on the corner of Sand Lake Drive and International Drive in Orlando. It will be able to take 8 riders per car, with four riders in the front row and four riders in the back row. With a ride time of approximately three minutes, 5,200 feet of track, and a height of 570 feet, Skyscraper is expected to have a decent capacity holding around 1,000 riders per hour.

At the end of the press conference, we were invited to ride up to 570 feet in a helicopter to look down below on what will eventually become Skyplex. Skyplex will offer quite the sight as guests will also be invited to travel up a glass elevator to an observation tower and restaurant that will reside at the top of Skyscraper. On the top floor, guests will find the restaurant and on the bottom floor, guests will be able to roam the floor and soak in the skyline of Orlando and neighboring attractions including the Orlando Eye, a 425-foot ferris wheel. Skyplex will bring a whole new nightlife vibe to the International Drive district.

The photo above roughly shows the plot that Skplex will be located on. The big lot near the blue building (near center of photo) is where the press conference took place this morning. Although the plot looks fairly small, some nearby businesses, including: 7-11, Burger King, and the bowling alley, will be closing to make way for Skyplex. Although businesses nearby will be closing, Skyplex and Skyscraper is expected to create 800-1,000 brand new jobs in the city of Orlando.

Check out even more photos of the soon-to-be Skyplex and Skyscraper site as well as surrounding Orlando photos of International Drive and more.

If you’re unable to view the slideshow, click here.

Stay tuned as we bring you even more videos throughout the day. Be sure to get social with us on Facebook and follow along with us on Twitter @BehindThrills for the latest updates!