Over the weekend, SeaWorld Orlando had a special preview for annual passholders, of it’s all new sea lion and otter show, Sea Lion High. The show will not premiere until later this Spring, and the audience did not get a complete show. What they did get instead, was a look at how the animals are trained, and the hard work and steps that goes into creating new behaviors for the show. The demonstration was led by Kelly Flaherty Clark, and showcased one of the new techniques that will be used in the new show. 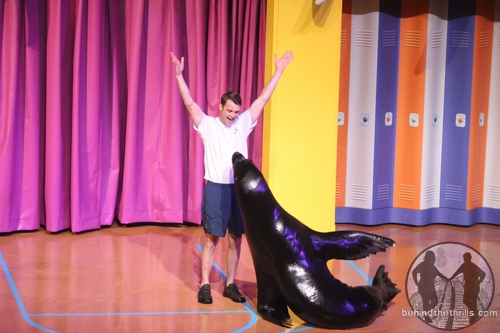 So what does it take to train a sea lion? Despite what some might have you believe, it takes a lot of work, patience and love. The length of the process really depends on the sea lion. The animals are just like kids, in that some kids pick up on things quicker than the others. And one thing that most people think is that these are tricks. No, these aren’t tricks. They’re behaviors, and they are all based on what the animals have been spotted doing in the wild, and what their bodies are built for.

How do trainers get the animals to do what they want?

The park uses positive reinforcement to train all of their animals, whether it be sea lions, dolphins or even Killer Whales. When an animal does something that a trainer wants them to do, they get recognition. It can be anything from a fish, to jello, or even something as simple as a rub from a trainer.

When the animal does something that is not desired, the response is completely different. Despite popular opinion, the animals are not beaten, or starved, or put in isolation. When there is a behavior that is not wanted, the trainer simply does nothing. The trainer does not react. They will simply stand there for a few seconds, and then try it again. That’s it.

The behaviors also go in steps. In the new show, there is a moment when an animal fakes being injured to avoid going to gym class. He limps around while holding one flipper up. To get that behavior, each movement is pieced together one step at a time. Instead of just trying to get the animal to hop around, they first train the animal to move in a way they want, then to hold up the flipper, then to hop in the way they want while holding up the flipper. Sometimes, it takes even more than that.

Video-Trainers go through a new

Sea Lion High is going to be a very important part of the park’s line up, simply because it gives not only the animals a chance to learn something new, but also gives the park the chance to showcase how talented the trainers are, and what kind of relationship they create with the animals.